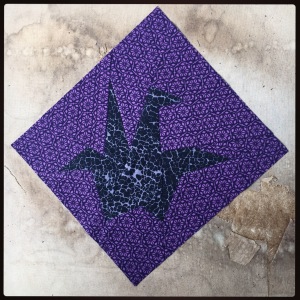 Today I was told that the stage managers are worried about upsetting me.

My job here is done.

Or, at the very least, that’s a step in the right direction. Respect our work!

Person I would have sent it to: TBD

Music I listened to while sewing: I’m letting Spotify shuffle through some music randomly tonight. Although I really want to listen to Adele, I’m afraid she’ll make me start crying.

Thoughts/Feelings behind the block: Yes, I was jokingly told today that the stage managers at work are afraid of upsetting me. And, while the comment was made in passing, in amusement, in bewilderment, I did get a little flummoxed. Then I thought about it and I realized, that’s GOOD.

First of all, it means they (actually WE) are learning. Together. It’s no longer “okay” to come to the shop and demand that something be provided immediately because it’s the most important thing in the world. Information has to come to me (not any random person in the shop) and I will get to it when it fits into my schedule, but also as soon as I can. And I will document every little thing they ask for. And I’ll provide paperwork listing this. And I’ll ask them to sign the paperwork. And I’ll ask them to return things on a specific date.

See how ordered I’m making things? And see how people actually are aware of items and time and energy and efficiency now?

Things are changing here! The climate is slowly shifting (in one department)! I consider this a victory!

But, still, I want to go around the theater tomorrow and ask people if they’re afraid of me. And then tell them that they have no reason to be. Insisting on a “system” or asking for information or asking that people be accountable for their actions, needs, requests, work, etc., that doesn’t mean I’m horrible. It means I’m trying to create order in my department, which previously had no order.

Anyway, I’m having another glass of wine tonight because I’m secretly nervous about this show.

I’m nervous that I don’t know what I’m actually good at anymore.

I’m nervous that the Dream Of Myself isn’t actually viable or realistic.

I’m nervous that I was never meant to be a designer.

I’m nervous that people don’t see me as a colleague or partner or friend or human, but someone to fear or tip-toe around.

I’m nervous of not making a difference, however small it may be OR however large it may be.

I’m nervous that I’m wasting time. I’m 36- simultaneously young and old in a decade that speeds by too fast- but I’m afraid that I’ve given up or others have given up or that I never had anything to give up on.

I’m nervous that Portland wasn’t the end. Even though I *know* deep down that I won’t be here forever, I DO want this time in Portland to be for the better. I want to learn and expand and grow and develop. I don’t want to be constantly putting out fires that don’t need to be set.

I’m nervous that I was never meant to be a New Yorker.

I’m nervous that I’ll never have the ability to go on a date again.

I’m nervous that I’ll never be able to connect with someone again deeply.

I’m nervous that there’ll never be someone to connect to deeply. I know I have good qualities to offer, but where is The Someone who sees that?

I’m worried that my dreams of an Immersive Theater have died or were foolish.

I’m worried that I won’t be able to pay off my debts- financially or emotionally.

I’m worried that I’m killing myself… albeit slowly.

And so I drink at night here in Portland on my balcony and stare at the distance, meditating on the fact that people worry about upsetting me and my desire that people actually and earnestly LIKE me in this fucked up town. I’m so tired after 15 months of trying to cobble together a friend here and there.

Anyway, Tomorrow and tomorrow is another day.

Love your friends and never take them for granted.