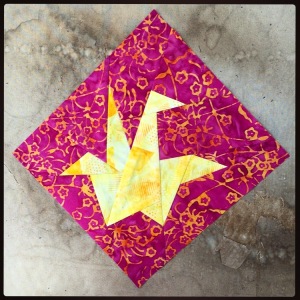 I’m celebrating the one day off I had this three day weekend as best I can; it’s also the last day off I’ll have for 12 days.

Person I would have sent it to: TBD

Music I listened to while sewing: Hm. I found a new playlist on Spotify, and I can’t remember it’s name… I eventually ended up on Madonna’s remixes of Ghosttown.

Thoughts/Feelings behind the block: Well, if I’m not going to have a day off until Saturday the 19th of this month, I might as well enjoy this one day off, right?

I haven’t done much of anything really. I made a Crane. I went to the gym. My dog has been on three long walks. I’ve booked a space for my dog at a kennel for when I’m in New York. I’m a bit tired.

While I’m typing this, I’m also messaging a friend in Chicago on Facebook. A year ago, his girlfriend of seven years left him. It seemed like it came out of nowhere for him, but I think he’s now realizing that the signs were all there, things were ending, and they may have happened because of his propensity to overwork himself on his theater jobs.

It’s all about balance.

I maintain that working in theater ISN’T worth it if you don’t have time for outside interests, for friends, for relaxation, for recharging, for… well… for A Life. If you’re doing and making theater only to pay bills, don’t you think you should rethink your Life plan?

I’m arguing that any job will kill your soul… if you let it. It’s all about giving permission for it to do so, allowing it to take over and kill your Life.

It’s all about balance.

And, again, let’s just acknowledge how much my life has changed.

In New York, I was obsessed with finding work and working and making money to barely cover my bills, but didn’t have a Life to live or the ability to have one..

In Portland, I’ve got the work and am making (a small amount of) money, but I don’t have any outlet to do the work that I want to do- create theater- nor do I have the social outlets that I thought having a job would provide.

Neither here nor there.

The grass is always greener.

The only consistent thing is change.

Here’s to finding an opportunity here or elsewhere.