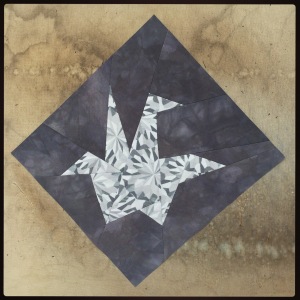 Let it be known that today will forever be the day wherein I dropped an entire coffee mug full of hot coffee on my sewing desk, my sewing machine, myself, and my Crane In Progress.

Nothing like having to mop your floor, wipe down your desk, and throw out something you were in the middle of sewing at 7am.

(I did manage to save some of the background pieces though, and none of my other projects [or MacBook Pro] were harmed!)

Person I would have sent it to: Michelle F.

Michelle was another one of the students involved in the workshop of The California Project. She was very excited to be involved in the work, very enthusiastic about what we were trying to do, and spent a lot of time discussing the story, the genre, and the contributions of the other actors involved.

When we assigned roles from the Backstory- after a few days of working with the student actors, we gave her a role that seemed to excite her the most.

We also used her as the finale of the piece. Her story and resolution was what would end the evening. At the time, it seemed the easiest and most straightforward thing to do. We start in one location. We’d end up in the same location. The person who drew our focus first would be the one to give the focus back.

Looking at what I want to eventually accomplish, it was a nice first try. I should have figured out a way to make Jessica’s quest end in that moment, too. It’s something, as I try to move forward and rewrite ideas and characters and events, of which I am very aware.

The quest to find someone has to be the over-arching theme to the evening. And that discovery, that reunion, has to be the light in all of that darkness. Those dark qualities spinning around it are great and hopefully exciting, but I need to get that moment of relief in there for everyone.

Music I listened to while sewing: I am still stuck on Galantis right now. Loving the song “Peanut Butter Jelly,” but “Dancin’ To The Sound Of A Broken Heart” is really great too.

Thoughts/Feelings behind the block: Here’s something that I’m noticing.

I am, right now, incredibly focused on money. Incredibly.

Part of me realizes that I’m still learning (remembering maybe) that a paycheck is going to be deposited into my checking account every two weeks. I am salaried (both fortunately and unfortunately given the amount of work I do here), which means I know how much to expect to be paid to me every two weeks.

I mentioned on Friday or Saturday that I took my French Bulldog into his annual vet visit (his first in Portland), and I needed a year’s supply of heart worm pills, of flea/tick pills, along with the usual examination items. We also did some blood work, in the hopes that we could find out why he’s behaving like he is (turns out he’s gaining weight, getting slower… but everything inside his body checks out. Does this mean he’s just lazy?). The bill I was $500.

Here in Portland, I’m struck by that nonchalant attitude. I am incredibly, upsettingly conscious of how every dollar is spent these days. (Maybe it’s also that my job really just seems to be about keeping things realistic and under budget?) This doesn’t mean I don’t spend money; I did just buy two more books to read yesterday… and I need to buy more fabric for this project very soon. But, I’m so very paranoid about where this money goes and how, even with a salaried job that pays *kinda sorta* well, I can’t really get ahead.

What if I need to go to the hospital?

Let alone the fact that I should really buy some replacement shoes and clothes. I haven’t bought myself anything to wear in over a year, which means my “usuals” are getting, well… tired. I need to go to the grocery, but…

Why am I so paranoid about ending up broke in Portland?

I feel simultaneously like an adult and a child right now.

Okay, off to make myself coffee after this morning’s mishap.