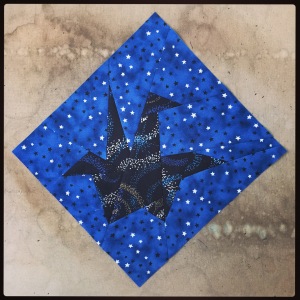 What’s that quote? Aim for the moon… because even if you miss, you’ll land amongst the stars?

Person I would have sent it to: Today, because I feel like I haven’t– I mean, I can’t remember sending him one yet– would be for Jason M.

I met Jason back in 2011 through Chris M. Chris and I had just met for lunch and we were wondering through Union Square that afternoon, talking about boys and theater and money. I had recently been “stood up” by a guy (or, to be honest, the guy had disappeared out of the blue like they sometimes do in New York) and Chris was looking for a way to get more work (like we all were). As we were wondering through Union Square, we ran into Jason… who was a good friend of Chris’s. (They’re now roommates in Brooklyn, I believe.)

Jason is an actor. He had finished the MFA program at Columbia (overlapping with my friend Marianna and a former student of mine from Chicago, I think).

I’d like to send him a Crane, not because we became close friends or hung out very often, but because he seems to be going through the same kind of emotional roller coaster that I experienced in early 2014. Do I leave New York? How do I make this work? Do I want this to work? What am I doing? How can I sustain this and still live here?

When I mentioned on Facebook that I was leaving New York for Portland, he reached out to offer his congratulations… and also say how he sometimes wonders how– or IF– he could leave the city. He’s originally from Seattle (again, I think), so he’s familiar with the Pacific Northwest and he might have a support network here.

I messaged him a few weeks ago. I told him my life wasn’t perfect or everything it could be, but being in Portland was a good thing for me. I was able to get my head on straight (or straighter) and really start to analyze what I wanted to move towards.

I only today remembered that I should send a Crane to him today because he posted a video about the so-called “abs privilege” in the gay community. It was hilarious, and I enjoyed it (’cause it’s true).

Jason immediately posted something else soon after, feeling like New York was trying to squeeze him out like a bad organ. I hope he finds what he wants. Or gets an opportunity.

Music I listened to while sewing: We just had Oasis on in the shop… in case you wondered, the 1990s never ended here in Portland.

Thoughts/Feelings behind the block: Well, something has started. I was offered a job back out east for the summer, and I’m not sure how to proceed. It would only be three months of work. But it would be something to do that would keep me busy and I would keep my New York contacts alive and I could see if it’s another direction I could pursue.

Since we’re technically a “dark” theater (i.e. closed) during the summer months, I’m not sure I could take it… they want me here year round, but what will I be doing if there’s nothing happening here?

This offer- regardless of what I do- is a great confidence boost. They called ME. I didn’t apply.

That makes/made me feel awesome.