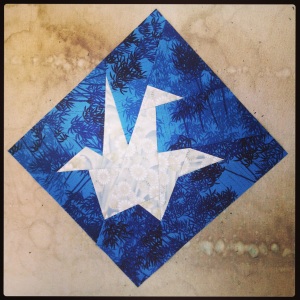 Just a little left of center this morning. Oops.

Person I would have sent it to: Meg Z.

So, onto my time with Priscilla Queen of the Desert, as it drove itself to Broadway by way of the West End and Toronto. By sheer coincidence (and one friendly connection), I had managed to be hired as the Assistant Costume Designer at the last minute when the staffing was shuffled around.

I started in late August/early September of 2010, with a little over three weeks to prep a show that was being built in New York, Australia, England, and Canada. Since the show had had two prior incarnations in London and Australia, we would be inheriting a lot of the old costumes from those two runs… since re-creating them new would have been extremely expensive and time-consuming. Everything about the show seemed to be happening fast, and with an eye towards resources and keeping the numbers down.

It was advertised that the show had tons of costumes in it (I forget how many actually) and had a budget of over a million dollars to bring all those Swarovski covered costumes to life again. I wouldn’t doubt it; those stones are pricey and, by the time we were done with it, almost every surface was covered with them.

While sparkle costs, it also sells.

But, there were a fair number of scenes in the show that needed regular, “every day” clothes that were as boring (and cheap) as possible just to further hammer home the point that the drag costumes were fabulous and spectacular and amazing. One of my jobs was to shop outfits online for certain “locations” and musical numbers, sitting in the studio space that we rented.

Meg’s job was to go out and source things in New York to flesh out other parts of the show. I was the one assigned to sit at the computer; she was the one who got to schlep and traverse NYC looking for appropriately boring and cheap clothes.

Meg knew the Associate Designer from NYU’s grad program. I don’t think they overlapped– I got the impression that he graduated a few years prior to her time there and my time at Yale– but there was the NYU network/mafia in place.

I liked having her around. I liked working with her. I don’t know what other kind of work she did or does in New York. I knew, at the time, that she had a small child and was married and living in Queens. We walked frequently to the NRQ subway at 57th and 7th frequently at the end of the day; I could take anything to get to my transfer at the Lexington/59th Street Stop. She had to wait for a specific train to get to her area of Queens.

I haven’t run into her since… or I guess I should say, in the past four years I lived in New York. But, it was good to meet her. Amongst all the tension and speed that was going on in those weeks building up to Toronto, she was a good energy to have around.

Music I listened to while sewing: I’ve got my “Dancefloor” music on this morning. Much needed this morning to get me moving…

Thoughts/Feelings behind the block: I’ve been thinking a lot about my friend Gene’s comments to me on Wednesday.

Now, I know what he was hinting at… At the time, I was saying how I miss New York and what I had there.

“What did you have here exactly??

I mentioned the museums, the Garment District, my (few) good friends, the Strand, my gym, the subway, Central Park, and so on.

But, Gene’s hint… that maybe I’m always a little dissatisfied wherever I go, no matter the situation… that’s honest and somewhat true, if I’m going to be completely open with myself.

What am I looking for that I haven’t found yet? What don’t I have here that New York gave me? What was so great about New York that the poverty and competition and job insecurity made it worth it?

There’s this quote, attributed to Martha Graham, that I’ve held onto since I first read it in London during that fall semester spent abroad:

“There is a vitality, a life force, a quickening that is translated through you into action, and there is only one of you in all time. This expression is unique, and if you block it, it will never exist through any other medium; and be lost. The world will not have it.

No artist is pleased. There is no satisfaction whatever at any time. There is only a queer, divine dissatisfaction, a blessed unrest that keeps us marching and makes us more alive than the others.”

I’ve always thought that summed everything up perfectly: what I’m dissatisfied with… whatever that is… it keeps me going and moving and trying. So that feeling has to be good, doesn’t it?

But, what if it’s not? What if I remain unfulfilled here in Portland, remembering a New York that wasn’t actually my experience but is a New York of hopes and dreams and possibility, and that dissatisfaction convinces me to leave here and go elsewhere?

Is that going to reinforce my hermetic life? Will it get me anywhere?