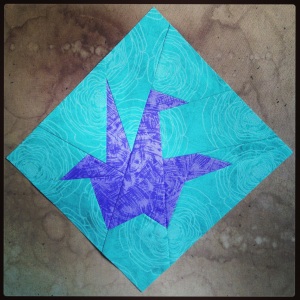 Well, my meetings today were cancelled and rescheduled. Nothing on the docket to do now…

Person I would have sent it to: Janann E.

Janann was another one of the Technical Design and Production Students in my year at the Yale School of Drama. She was always really nice to me, and sometimes that was everything.

Years later, I ended up randomly dating a friend of hers from high school for a very brief period, while living in New York. I feel I was the reason that dating relationship didn’t go anywhere.

Music I listened to while sewing: This morning, Spotify introduced me to a group called Welder. I’ve listened to one of their albums almost three times now.

Good ambient music, but hasn’t converted me yet.

Thoughts/Feelings behind the block: In about six weeks, I’ll be flying to California. I’ll be there for two weeks, working at University of California Irvine on a workshop of a piece that a colleague and I have been developing since last spring? last summer? (Has it really been that long?)

The purpose of the workshop will just be for experimentation, I guess. The two of us, have been working on a text- what we’re calling our backstory- that will hopefully provide enough information for us to flesh out a play of sorts with a group of actors/dancers. We have a choreographer to assist us, a lighting designer, a team of sound designers, an assistant director, and will hopefully have a stage manager locked down soon.

In addition to writing it, he and I will direct the experience, it seems.

I’m trying to meet with as many friends as possible in the city for quick lessons in how to direct anything, in the meantime.

Our goal, basically, is to see if this project has legs to stand on its own. I feel it has the potential to do so, but it will need money behind it to really make it click together. I have ideas about how to go about staging it, but I really want to explore what works in terms of style and content and space and presentation.

I’m a little/a lot excited for it. It’s a risk, sure; I’m flying out there for 15 days to “experiment” in a rehearsal space with a group of people I haven’t worked with yet. We might come up empty-handed at the end of it, but I have a feeling even that will teach us and direct us towards something else. I have to keep reminding myself it’s not a waste of time. It’s another opportunity to learn and create something. Opportunity doesn’t knock the same door twice, I guess, so I want to pursue this as crazy as it sounds. (A rehearsal space, actors and designers donating their time, a performance space, and interest? That sounds like an opportunity to me!)

Hey, nothing happens without putting something on the line, right?

In the meantime, things are still moving forward. There are still possibilities open in New York. I’m keeping my fingers crossed.