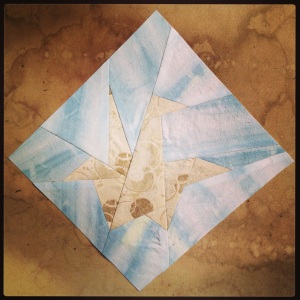 The colors are quite so subtle in real person.

Person I would have sent it to: Tom M.

I’m going to leave it at that. This part of the project is very difficult to navigate. Sometimes the waters are calm, and I get the sense that I’m contributing something positive to the world with this aspect of The Thousand Quilted Cranes. Other times, I feel like this is rough, and I’m not quite sure how this will be taken.

I’m doing this project to remind myself that I’m not alone in the world; people have contributed to my life here on Earth, and my existence has been touched by some really great people. Despite how I can sometimes feel about my worth and value in New York, in Theater, in Design, in Life, in Dating… there have been people in my life. The people I’ve been around, spent time with, brought into my life, don’t they give my life some kind of value? Some kind of meaning?

But then I wonder if I’m allowing this Project too much power over my self-esteem. Should my worth be contingent upon others? No. I should find it in me to appreciate and value myself for who I am and what I do and have done and will do. Hopefully, the people in my life have been attracted to my strengths and experiences and personality.

(Then why don’t I have more people in my life?)

(Then why do I spend time thinking about people who may not have been the most pleasant people in my life? Have they made just as much an impression on my life as those who’ve been good? Or have they made more since I’m trying to validate my experience?)

I don’t know how this Project will be taken, if it’s ever made completely public. I worry that some people will be upset or offended (Why am I not included? Why am I included?) by it. (Why did he write that?)

I’m also worried that this will be dismissed without a thought.

Music I listened to while sewing: I’ve got someone new on today… Iamamiwhoami. Haven’t quite decided if it’s a good choice or not yet.

Thoughts/Feelings behind the block: Last night, two dreams were had.

In the first, I was cast in a revival of Phantom of The Opera on Broadway. We were in the midst of tech rehearsals when I realized what was going on and where I was. I was positioned at the very back wall, standing in a chorus line, told to find an evocative pose of some kind. Apparently, this staging and the production were pared down- perfectly period clothes, but with no set, exposed modern lighting fixtures, and choreography a la Fosse. While one would expect to be dressed for the end of the 19th Century in a production of Phantom, I was dressed for the 1790s and the French Revolution (not the Les Mis Revolution, but the one that left Marie Antoinette in a spot of trouble). I stood there, dressed a century out of place, and affected an evocative pose like my life depended on it.

In the second dream, I was having my teeth pulled out. One by one. They were rotten, cracked, decayed and one after the other, I saw a dentist take them all out.

I’m set to design one dance piece in New Jersey next month. It won’t be much work, and I’ve worked (nicely) with the choreographer before. It’s something. After that, a two week trip to LA to lead a workshop in the hopes that we can figure out what to do with this project next. Then, I go to Arkansas for a month to start and finish this Pippin.

When I mention these things, it should seem like things are fine, right? Then why do I feel so unsettled by it all?

I’m waiting to hear about what work I can find for the next five to six weeks. I’m also waiting on news of different work after June. A lot is up in the air, yes, and it’s all out of my hands.

I’m keeping my fingers crossed that some thing turns up.