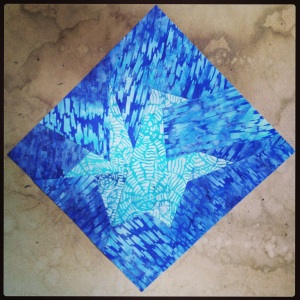 Didn’t sleep very well. Was craving orange juice last night; I think I’m off the age where that delicious yet acidic goodness should be consumed in moderation.

Person I would have sent it to: Miriam C.

Miriam was a lighting designer a year ahead of me at the Yale School of Drama. When I arrived in New Haven, she was also working on that first production of the school year- Orpheus Descending. What a challenge… to light a world that is all blues and greys and dreary without turning everything into depressing mud.

I think Miriam has one of the most pleasantly dry demeanors out there. I think that’s a good way of describing her. I mean, you know how some people with dry senses of humor can be borderline ironic or biting with their observations? I always just thought Miriam was super aware and smart, but really nice about it.

Music I listened to while sewing: I’ve got a soundtrack on this morning called “Prisoners.” It says it’s a movie out this year. I haven’t heard about it… but it’s all wind instruments and melancholy, so the perfect start to a cloudy Monday.

Thoughts/Feelings behind the block: This is what I want to say today. It’s more a reminder to myself that a lecture to anyone reading.

I started this project to remind myself to approach life one day at a time, rather than looking to the end for an answer. I wanted to teach myself to focus on the now, and not get overwhelmed by the scale of life ahead.

I wanted to remind myself that living life obsessed on details isn’t living life. At the beginning of this project, I struggled with that. I deliberated for several minutes, weighing which fabric pairing was “best,” which one was “good.” Eventually, I realized with 1000 blocks, and 1000 different color combinations, the individual choices wouldn’t be so weighted. Make a choice. Act upon that choice. Move beyond that choice.

I won’t, to the best of my ability, repeat a pairing of fabrics. I’ve got a system for it now (if you haven’t guessed, I’m particularly Type A when it comes to organization), and so far it works. I’m doing this to highlight the 1000 people dedicated within the project. No two people are alike. But, the people within my life (whether good or bad or indifferent or integral) all have common themes or qualities. Therefore, the foreground fabric in this Crane (Number 319) was also used in Number 278 as a background- not because of any specific connective tissue between those two specific people (Miriam and Rondi). It’s random. It’s unplanned. But, those are two theater designers. So maybe there is an underlying, unspecific link between everyone.

With 1000 of these Cranes stitched together, like a Pointillist painting, will they blend together? Will they stand out as individuals? Will they ask that people look closer?

Also, there are three points in each block, that I pin extra carefully to make sure corners match up. Other places, I make the attempt to be as exact as possible, but I don’t worry as much as I do with these three areas. It took me a while, certainly a few hundred blocks, to realize the same lesson. Yes, there will be some days where I don’t get the corners perfect. I always make the attempt. I always try. And I’m usually good. Sometimes I’m off by the minutest of fractions of a measurement. I’m not a perfect person, but I try to be as good as I can be… even if I sometimes don’t succeed on that… or even treat myself very well.

I, as a person… as a theater designer… and a partner… as an artist (if I can call myself that)… I am a product of all the relationships I’ve had in my life. I’m not perfect. I never was. But I’m here and I want to be a good person and I want to honor the people who’ve helped me along the way, letting me into their lives, teaching me, loving me, ignoring me, insulting me, talking with me, working with me, hiring me. It’s a way to say thanks. It’s a way to say: “Look, sir, you’ve been formed by some really great encounters! Look what you’ve done! Look what you can do! Look where you’ve been! People are in your life, and you aren’t alone!”

It’s a way to remind me, and maybe you, that we don’t exist in a vacuum.

But even if we do feel we exist alone, if we feel helpless, it’s a reminder that there have been at least 1000 people who at one point stood in my corner. And there might be more than 1000! I’m only 34 and who knows how long this project could go on?

I’m not alone. Neither are you.

And that should be enough.