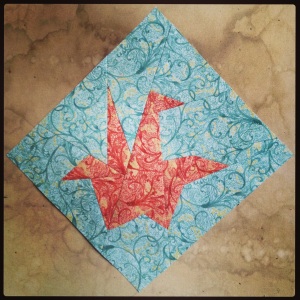 It’s snowing outside again. And the snowflakes are HUGE!

Person I would have sent it to: Kanae H.

Kah-Nah-EH… That’s how you pronounce it. She would always clarify that the “EH” was more like a burp than a “eh?” God love her.

Kanae was another one of the set designers in my year at the Yale School of Drama. She grew up in Japan, but went to college at LeHigh University in Pennsylvania and came directly to Yale from college. She was the youngest out of the ten of us.

She was quiet in class, almost reserved, but conversely could be really fun at parties. Our second year, at the YSD Halloween party, while I dressed up as the Lady of the Camellias (a spoof on a play we were doing at the Yale Rep then), she went as a Geisha… she named herself Tokyo Drift, after one of the Fast & Furious sequels.

She had an incredible aesthetic when designing sets. They always seemed clean and ordered, and beautiful, even when they were dirty and chaotic. Ming, as he was wont to do, picked on her a bit in class, trying to push her out of her design-comfort zone; Kanae cried a few times in class. (We all did though.) One time, during our first year, she brought up that she didn’t feel like she earned the right to be called an “artist” yet. Ming took exception to that… lecturing us on how our work makes us artists, how what we do is noble, how we shouldn’t doubt our being “artists.”

Our second year, Kanae and I were studio mates again. Our third year, our desks were in the same corner of the cramped third year studios.

A year after graduating, in the spring of 2007, most of the designers in my year got together in a dive bar in the East Village. We were wishing Kanae good luck; she had recently decided to move back to Japan. It was getting difficult for her to keep renewing her work visa to stay in the country, and adding that to the difficulty of finding good work, she was going to go back home.

I wish she were still here.

Music I listened to while sewing: I’ve got “Dancefloor!” music on this morning. Crazy!

Thoughts/Feelings behind the block: I suppose all we can do is keep trying.

I spent yesterday going over my resume, looking at the work I’ve done in the 13 years since I graduated from Kenyon. I’ve done a LOT… why do I get down that I haven’t “done enough?” I’ve worked on Broadway, in New York, regionally, at universities, and even internationally. I’ve done theater. I’ve done student films. I’ve done a web-series. I’ve been to the Tony Awards. I’ve even acted a bit.

Well, that’s not true: I suppose I’ll know I’ve done enough when the struggle gets easier. I don’t think it’ll ever get easy, but I want it to be easier… you know?

Easier, but not easy.