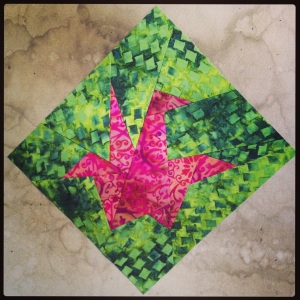 Person I would have sent it to: Barb L.

Barb was another one of the 20 or so Acting Apprentices my first season at Actors Theatre of Louisville. In that first “production” I costumed with them, she played Goldilocks (of The Three Bears Fame). Her dress was a yellow cotton print, and had originally been built for a Humana Festival play the year before.

Later in the season, when Anne Bogart and the SITI Company came to rehearse and perform Hay Fever in the winter, Barb was cast as one of the background “workers.” They’re not needed in the script, but the production wanted to see some of the “hired help” that tended the house while the people IN the house went about their antics. Barb was cast as some kind of lawn maintenance person. I’m not certain, but I think she wore denim cut-offs and an old t-shirt, with leather work gloves, a baseball hat, and boots. I might be confused… because I also think she might have worn navy coveralls. But the guy who played the exterminator wore that costume. We wouldn’t have repeated a look.

Barb came to Louisville with her college girlfriend. They lasted that entire season and then some; I think they’re married today. Even though I’ve only kept up with them by seeing their activity on Facebook, it’s nice to know they’re still a team.

Music I listened to while sewing: A year or so ago, I made a playlist of Motown songs specifically for when I sat down at a machine to quilt. I’ve got it on this morning… Although it’s funny; at some point, I added Edith Piaf and Adele and a bunch of Disco.

Not so Motown anymore, I guess.

Thoughts/Feelings behind the block: Merry Christmas, if that’s your thing today.

Happy December 25th to everyone else.

The Dog got his Christmas present last night, a bully stick. He spent most of the night chewing it. This morning he’s been walking around with it, showing it to me, and then hiding from me when I look in his direction.

The bone, meanwhile, was placed next to me on the floor. He’s re-gifting!

Anyway, whatever today means for you, hope you enjoy it. Whether it’s presents and Santa or family or friends or food or a trip to the movies or take-out or work or just relaxing, hope it’s a good day for us all.

I woke up this morning to read about two people passing away on Facebook. One was a grad school friend’s partner. Another was a high school friend’s relative. My friend Chris called last night to talk about his grandfather who passed away over the weekend, he was just leaving the funeral. Another acquaintance from school went to a funeral last weekend too.

Dreary news to read and learn. But a good reminder to enjoy the day we have in front of us and be appreciative when tomorrow comes, you know? Don’t take the day for granted. Live each day like Christmas, I guess.