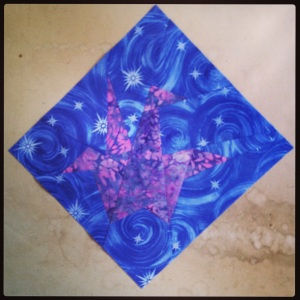 Person I would have sent it to: Neala K.

She was Michelle’s roommate. They didn’t know each other before college, obviously as Michelle was coming from another country and Neala was from Washington state.

The two of them were paired, I think, because they were both swimmers and had the same expressed interest in school (pre-med and Chemistry). I think they lived the same schedule the entirety of that first year.

Even though they appeared to have very different personalities, I always thought they got along rather well together. Neala was very focused on her class work and swimming training. I always enjoyed hanging out with her, because she was so smart and driven and quirky and fun.

I think the two of them complemented each other nicely.

Music I listened to while sewing: I just hit random on iTunes this morning. I’m all over the place musically today… and maybe mentally too.

Thoughts/Feelings behind the block: I suppose the best thing I can say about this week is that I survived! I’m still here!

Sometimes that’s all we can ask… just getting through it, you know.

Sometimes, that really is good enough.

Anyway, so much to do: need to treat the dog to some time at the dog park. Need to clean up the apartment a little bit. Need to return some clothes we don’t need in The Tempest so I can get some money back. Need to buy a white pair of pants, white pair of shoes, three turquoise (or pale blue or pale sea green) chiffon (or maybe even just a lightweight cotton?) skirts. Need to mock-up a tunic and a chest plate for a Monday fitting. I need to do all of this before 7pm… because strangely I now have plans tonight. I originally was going to stay in all weekend and sew (sew sew sew!), but my priorities shifted.

This may not mean anything to people outside of New York, but I was offered a free ticket to an event at Sleep No More tonight. Really random, but yesterday morning I was asked if I wanted someone’s extra ticket.

I have no idea what I’m going to… but I figure after this past week, I deserve a night out.

Time to start the day.

Take it one day at a time. Let’s keep moving!