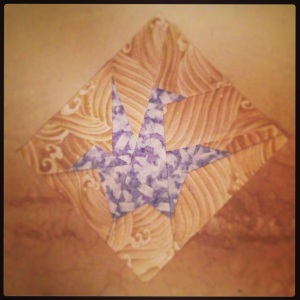 There are days when it takes 10 minutes to sew a 4 inch straight seam.

There are days when the bobbin runs out one inch away from finishing the completed block.

There are days when the sewing needle snaps in two when you go over pressed seams. (Not sure how that happened; but after replacing the needle, the machine felt so much happier!)

Person I would have sent it to: Oh, let’s take a break from Middle School.

Today, I realized that I hadn’t given one of these to my late Uncle Larry; he passed away the summer before I started my first year at the Yale School of Drama.

He was mentally challenged, as is politically correct to say these days. I guess.

We weren’t close, most likely because I kept myself away from him. But he was a nice soul. He was a kind person.

Seeing him in his casket, and hearing the eulogies directed towards him at his funeral was extremely moving.

It was a sad lesson for me to learn; I had never taken the chance or let myself have the chance to be his friend. It’s shameful to admit, but my anxiety around him kept me from knowing him.

That is shameful. It just is. So, Uncle Larry, this Crane is for you. I actually think it looks better in person than the picture, as it’s more of a golden yellow and white and blue.

Music I listened to while sewing: I couldn’t think of anything to get my mood back on track today (what a day!), so I went with the old stand-by… Yes, you guessed it: Sunday in the Park with George.

And, strangely, it took me the entire playlist to finish the Crane (which meant I was slow). But, on a better note, when I finished and tagged the Crane with a safety pin and a bias-tape label, the audience recorded on the final song erupted into applause.

That kinda made the day worth it.

Thoughts/Feelings behind the block: Today, I want to tell myself something; by extension, I also want to tell you. You’ve followed along for 67 days or so. We all deserve to hear it, at this point.

I don’t want to give up.

I don’t want you to give up.

Let’s not give up.

Maybe you’re frustrated with the dating prospects in your life. Maybe there aren’t enough hours in the day. Maybe you can’t quite get yourself to the gym or to the park for a run like you feel you need to.

Maybe your bank account is a little low. Maybe work seems to suck more out of you than you can stand. Maybe work is just boring.

Maybe someone is getting farther along in life or their career or whatnot faster than you. Maybe nobody notices you. Maybe the wrong person notices you.

Please don’t give up.

“I am a gift that has been given here.”

“I am a gift that can keep giving.”

I’d write more about today specifically, but I’m so very incredibly exhausted. When my schedule is back to normal tomorrow (hopefully), I’ll bring more to the plate.