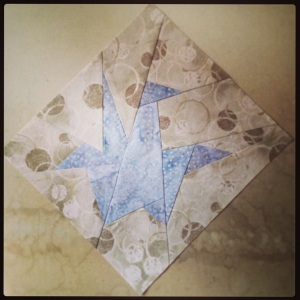 Hey, I matched my ironing board to my background fabric!

Person I would have sent it to: Erin G., elementary school chum. Her mom was the school’s librarian. After I transferred to a different high school than the ones my childhood friends would go to, I heard she and her mom had some difficulties.

Music I listened to while sewing: Jason Robert Brown’s The Last Five Years. There’s a revival production at Second Stage, off-Broadway. I’ve heard it’s a good one to see.

And while I enjoy listening to the album of the original production, I’m not sure I want to see a new one.

Maybe I will. Although there are so many other shows that are on the list to try to see…

Thoughts/Feelings behind the block: Seven weeks in. SEVEN weeks in.

Is that a milestone? Or would tomorrow’s Crane be a better marker?

Seven weeks of laying pattern pieces on scraps of quilting cotton. Seven weeks pinning bias to bias and trying not to stretch out my stitching lines with the heat from the iron. Seven weeks of trimming away healthy seam allowances. Seven weeks of navigating that last central seam, which is proving to be the true test of how accurately my tracing and pinning and ironing has been.

Seven weeks of thinking about people from the past. Seven weeks of remembering names and trying to put memories together with people, some of whom I haven’t seen for over 20 years.

Seven weeks of the A Thousand Quilted Cranes Project.

It’s too soon to say how I’m progressing on both sides of this endeavor. The pile of Cranes is only an inch or two high at this point and, when laid, out the colors seem vaguely connected. I don’t know if I’m any different, other than being seven weeks older and having a weird mixture of confidence that this block can know go together simply and doubt that I have no idea how to pair colors and patterns.

Seven weeks. Seven weeks of having an outlet that keeps me focused on the task at hand, reminiscing about where I’m from, and allowing myself to think about the next day ahead.

Seven weeks of taking it one day at a time. Seven weeks of making progress, staying calm, and sometimes needing to press a reset button.

These upcoming seven days will prove interesting: I’ve taken a shopping job for an Opera for the week (hurrah for some incoming money- FINALLY!). I’ll need to be working by 10am for the next week, which means my seven-week habit will need to be flipped for a spell. Instead of tackling a block first thing in the morning, I’ll have to wait until the evening to continue this.

Cheers to being flexible! And feeling a little bit back on track.

Here’s to a good week ahead, ladies and gentlemen.